Navel gazing at the tenure process continues and anxiety can be crippling. The same unfortunate lessons keep coming up, the University will outlive us all.  We can be discarded at any time or for just about any reason, regardless of tenure. The problem is that many tenure post-mortem cases do not seem to accept this reality, we need to go further and speak some honest truths about the process and the institutions we work for. 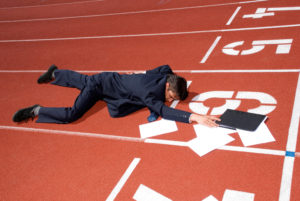 It has been near five long years since I was denied tenure at the University of Illinois at Chicago. Failing in the past has made me numb to successes since, once the worst happens, the highs and lows don’t seem so important anymore.

Often the survivors we hear about, myself included, were well prepared to succeed after a failure in the tenure process and therefore they often express a shock in the decision, but these cases are likely the outliers. Others seem to have a smug sense of satisfaction that they made it past the post, unaware of the difficulties those that come after them may face.  Surviving tenure in 2015 does not mean that the same person will survive if they had to go through the same process in 2016, the winds of the University change very fast.

I still have yet to be convinced that there is really any injustice in the tenure process because I am not convinced there is ever any justice in the process in the first place.  There is no such thing as an objective review of a record. Many tenure committees seek to only ratify decisions made years ago by the hiring committee that can do no wrong, a bad tenure case is a poor reflection on the department.  It says more about the climate at the University and department than the individual. We do not take the third year review seriously enough, failing to give warning at just what might be required to succeed.  In many ways a third year review is a friendly conversation between long standing colleagues that does not reflect the tenuous reality of the situation.

A healthy dose of perspective is needed, functional departments tend to not have these problems because they do all they can to avoid the worst since a tenure failure is a life altering decision.  The failing on my part was in being outmaneuvered.  I didn’t realize how important the 2nd and 3rd level votes were once the process was started, the negative votes I had early were clearly biased against methodological orientations and we all knew this, but I was not thinking about how those views would be misrepresented as the process moved beyond the department. We also should have had more frank conversations about methods and the fears that some have about quantitative research, but we never did.  I walked into a divided place and left a divided place.

The point of my last post on tenure failure was that evaluations of the process are best considered from the perspective of an outsider.  That is the only way you will survive, your tenure bar is external to the University because the people who will evaluate you are external to the institution and future movement will likely be external to the University.  This point still stands and keeping this in mind has served me well. For example, in Britain we have the Research Excellence Framework (REF), a process that is near universal for top schools in the UK and seeks to evaluate outputs on originality, significance, and rigor.  Focusing on this is the ultimate protection for those seeking promotion (the UK has no tenure, only a probation period). Focus on what is a given: outputs (publications, grants, PhDs), teaching, and service.

We need to accept that the tenure process is imperfect and subjective.  There are no great truths or wisdom to succeeding, those who set the bar might not be there to see that you make it over or to watch you smack yourself in the face when you don’t.  The person going up for tenure needs to set their own benchmarks and not seek to explain away failure to achieve objectives.  If you cannot meet your own goals, how are you going to convince someone else that you are doing the work need to achieve tenure?

For those that manage to make it past the worst, there is quite a bit of gloating in posts about surviving a tenure failure.  It is not that we have survivor’s guilt, but instead seek to rub a poor decision in the face of those that thought the worst about our records. This sort of person is exactly the type of person who will succeed after a tenure failure, they will do what it takes to succeed and prove someone wrong.  What about those we never hear of, those that do not get to gloat back to their former departments?  We rarely get to hear the story of those that fail to such an extent that they leave the academy all together. 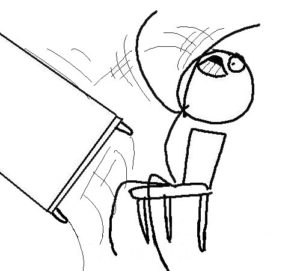 To me, the most important thing in the tenure process, despite the outcome either way, is to upturn the table after. What we do to achieve tenure is often safe, traditional, and stale. The beauty of tenure, failure or success, is that we get to move past this stalemate and reset our objectives. Are you really doing interesting work? Are you making an impact on society and addressing important questions? If you spoke to a random individual about your work, would you be proud to tell them exactly what you are doing?  What we do as academics can be so much more important than tenure, benchmarks, and empirics, but the process of tenure or promotion often obscures that.

Everyone wants to know the dirty details and revel in failure of a tenure denial because it is so meaningful. Something so meaningful is rare in the career of academics, most of our journal articles are read by fewer people in an Intro class. Tenure is more often than not a safety blanket that leads to stale and traditional research.  I could care less about tenure at this point, it is not what matters. What matters is what our work achieves, who we influence, and the students we inspire. To focus on anything more is just unrealistic.