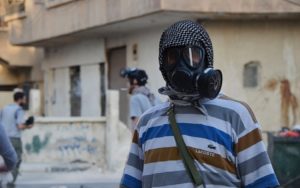 So here we are again. The Syrian regime has once again used chemical weapons against civilians, and the US is again faced with the decision of what to do about it. Same old, same old.

First, to give the current administration its due: complaints about the deal reached during the Obama administration to supposedly rid Syria of its chemical weapons are legit. That deal obviously didn’t work, and I suspect that most of those involved in negotiating it at the time knew it wouldn’t. Without verifiability and serious Russian backing, there was no way Syria would disarm. There was obviously no penalty for Assad to cheat, and so he cheated.

That said, whining about the past isn’t a foreign policy. Trump owns this problem now, just as he owned it a year ago. Last year, faced with the same situation, he lambasted Obama’s foreign policy and then proceeded to lob a few missiles at Syria. He declared victory and called it a day.

And here we are again.

To be clear, there are indications from those who know the situation that this recent attack is not an isolated incident. Syria has been using chemicals a lot. It just doesn’t make the news very often, probably because most of the country is unreachable by outside media – it’s just too dangerous, and Assad’s forces aren’t interested in press coverage of their war.

If this is the case, then the Trump administration’s attempts to deter further chemical weapons use by the Assad government have failed. That certainly seems to be the case with this latest attack, even if we accept former Ambassador Ford’s contention that this incident is unrelated to Trump’s comment last week that he wants to get out of Syria.

The failure of US deterrence efforts was easy to foresee. Deterrence is remarkably straightforward, and rests on imposing costs significant enough to override all other concerns (cognitive or affective). For all that I tend to see emotion as the primary motivating factor much of the time, there are times when facts impose their will on the situation.

The basic deterrence equation is simple. I declare the behavior that I want my opponent to not do. In this case, the US government wants Syria to not use chemical weapons. This had been a fairly robust international norm in general, but we can see that norms alone don’t influence Syrian behavior.

Once I’ve made it clear what I don’t want you to do, I then issue a threat: if you do that thing, I will inflict punishment on you. That punishment has to have at least two characteristics to work:

1) It has to be sufficiently severe that it overshadows the gains you might get from doing the thing I want you not to do.

2) You have to believe that I will actually carry out the threat – that punishment is certain if you cross the line.

The Trump administration’s deterrence efforts have failed on both counts. Previous rounds of military strikes have been relatively mild, a small price to pay if Assad thinks that chemical weapons use will help him win his long-running civil war. And we haven’t been consistent in applying those punishments. If the Syrian regime thinks there’s a chance it won’t get punished at all (based on past experience), that increases the chances they’ll cross the line again.

At this point, a year into the Trump Presidency, he’s dug himself a pretty serious hole in terms of deterring Assad. The only way to get out of that hole would be to reestablish both of the criteria above, swiftly and decisively and above all consistently over time.

In practice, this would mean a sustained campaign of airstrikes against a wide range of Syrian targets, sufficient in both quantity and importance that they threaten Syria’s increasingly-certain victory in its internal war. Assad is willing to trade punishment in exchange for victory – in order for a punishment to be strong enough (condition 1), it needs to put that victory in doubt. And in order for him to change his belief that he can just wait it out (condition 2), such strikes would have to be carried out over a long period of time, for months not weeks or days.

It’s not clear that the US government (Trump’s emotional volatility aside) has the stomach for such an undertaking. It would be enormously expensive, even if (or especially if) we keep pilots out of harm’s way by using cruise missiles and other strike-at-a-distance technologies. Deploying the forces necessary would put a strain on US military efforts elsewhere (Korea, anyone?) Innocent civilians will die, which will create international pressure to cease and desist. And Russia, of course, will object, and may engage in further bad behavior aimed at us or our interests.

So Trump will bluster, as he always does. There may well be some limited strikes, which Trump will praise as the “big price to pay” that he promised. Assad will quit with the chemicals for a few weeks, and everyone will forget about it. Then he’ll go back to doing what he wants.

This is lousy foreign policy, not least because it makes the United States look like a paper tiger. But bluster and Twitter rants aside, it’s not clear that there are any good options here. A Hillary Clinton administration would likely be stuck in the same situation, with the same lousy choices and the same calculations. The Obama administration did face this same situation, tried things a different way, and failed, just as Trump is failing now.

In addition to the tragedy within Syria (which is horrific for the Syrian people caught in the fighting), the longer-range problem is that Syria, with active Russian and Iranian backing, is largely dismantling the international norm against chemical weapons that we spent decades constructing during the Cold War. It’s not clear that there has ever been a point, post-1991, where the United States could have stopped that erosion, or what exactly we would have done to change that path. But it does mean that future use of chemical weapons is more likely by the day, and that future efforts to deter that use will be even less effective than they are now.