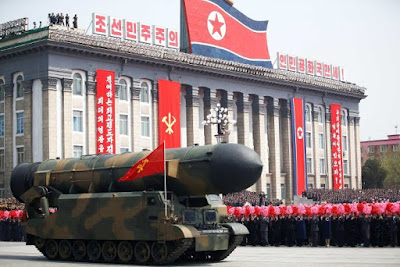 A good friend of mine posted this question to FB today. Since a decent answer requires more than should be put into a FB comment section, I’m writing out my thoughts here.

OK, honest question for the many people in my feed who are smarter about international stuff than I am. Hypothetically, what if the US were to just ignore North Korea? No threatening, no assisting, no engaging, nothing? Just maintain our relationship with South Korea and nothing else?Would that still create an unacceptable risk for South Korea? Would it destabilize our relationship with China?There are obvious humanitarian reasons not to follow this course, so I’m not advocating anything — I just want to better understand how the cogs fit together. Smart people, please educate me.

Like all questions of foreign policy, answering this one depends very much on what your goals are. The Trump administration hasn’t been very clear in articulating its goals towards North Korea, but my sense is that they haven’t shifted very much from where past administrations have been. Those goals reasonably include, or could include, the following:

1) Avoid war in the Korean peninsula (which would be horrendously catastrophic for everybody, and would result in millions of deaths).

2) Prevent North Korea from attacking the United States with a nuclear weapon.

4) Bring about regime change in North Korea, with a possible eye towards reunifying the peninsula.

#4 is, for all intents and purposes, out of bounds. The Kim regime in Pyongyang desires its survival in power above all else, and it has had a credible conventional deterrent against Seoul and South Korea for decades. We may say we don’t like their government very much, but no US administration has openly flirted with actively trying to change it – as Secretary of State Rex Tillerson reinforced just yesterday.

#3 is also essentially off the table. We have tried under the past three presidential administrations (both Democrat and Republican) to use various carrots and sticks to get the North Koreans to forgo their quest for nukes. None of this has worked, largely because there are no sanctions or offers of aid big enough to eclipse the value the Kim regime sees in having a working nuclear deterrent to the United States. Anything more aggressive than what we have tried threatens to run afoul of #1, which nobody wants. So while nobody in the US government can admit it out loud, we’re essentially stuck with a nuclear-armed North Korea with a limited strike capability against the United States.

That leaves us with Goals 1 and 2. These are indeed achievable using the same tool we’ve been using in Korea and elsewhere for the past three generations: deterrence. A basic deterrence posture does, in a sense, look a little like what my friend suggested: “ignoring” North Korea. They have weapons, we have weapons, we each make it clear to the other under what circumstances we will use them, and then we settle down and watch nothing happen. The Kim regime wants to deter an attack on its regime; we want to deter an attack on South Korea, Japan, and ourselves (the Chinese can take care of themselves). With both sides possessing a devastating strike capability, neither is likely to attack the other.

Of course, completely ignoring North Korea by  having essentially no relationship isn’t really an option. There is always a need for contact to avoid misunderstandings, to facilitate basic interactions, to jointly govern the DMZ, and so on. Most of the time this kind of contact takes place well below the public’s radar screen. Banning Americans from traveling to NK will probably help keep it there.

The longer-term danger which we, Seoul, and Beijing all recognize is: what happens if the North Korean system collapses economically? An internal crisis would likely spark a mass exodus of refugees, some of whom would be shot while fleeing but many of whom would wash up on South Korean and Chinese shores. A serious crisis could also lead to internal unrest, especially if the North Korean military begins to doubt the wisdom of backing Kim’s rule or, worse, factionalizes. There is no viable political infrastructure or civil society in North Korea, so any crisis could lead to chaos for a long time before order is restored. And given the level of weaponry in the hands of the North Korean military, that chaos could lead to a lot of damage, both inside the country and in its neighbors.

Unfortunately, neither engagement nor disengagement can have much effect on the North’s internal dynamics. If we see a food crisis coming, we can flood the country with food aid, which staves off the crisis at the expense of propping up the Kim regime. We should certainly maintain enough engagement to be able to see what’s happening – any warning at all that a crisis is brewing is better than none.

In the absence of a serious internal crisis, North Korea is a significant priority for US foreign policy but probably not a very active one. Beyond deterrence and some level of engagement (in which we may want to follow the lead of our South Korean allies, since they bear the immediate consequences), there’s really not a lot to be done. Even the Trump administration seems to have figured out that, while it’s easy to criticize your predecessors for “not doing enough” on North Korea, the reality is that we don’t have any other options and we do what we do because there is nothing else to be done.

Interestingly, China more or less shares our goals with regard to North Korea. They don’t want war, they don’t want an attack on the US (which would cause a war), and they would probably prefer that North Korea not have nukes. To the extent that we want to find areas to cooperate with China, North Korea is a promising field. But we should not suffer from the illusion that China can force the Kim regime to do things that we can’t. If China squeezes North Korea by cutting off trade, that could well precipitate the kind of internal crisis that no one wants. In essence, the Kim regime has at least two forms of deterrence: it can cause unacceptable damage with its military, and it can also cause unacceptable damage by its own untimely death. It’s a modern state version of a dead man’s switch.

The best we can hope for, therefore, is a North Korea that is stable (if poor and a human rights disaster) and contained. There is actually a fifth goal, which we and China also share: preventing North Korea from sharing its nuclear or missile technology with other actors elsewhere in the world. That’s an area where we can fruitfully cooperate. Export proliferation is also not a big priority for the Kim government, which cares for its own survival and not at all for anyone else in the world.

So the answer to the question of whether we can ignore North Korea is “yes, sort of”. Energetic and engaged diplomacy is unlikely to change the Kim regime’s behavior. Starving it (beyond the current levels of sanctions) could trigger a disaster. And so we sit, and wait, and hope to contain the damage when change eventually comes.