Forget the political sensibilities of the Daily Show or John Oliver. While Key & Peele, Broad City, and other shows like Maron or Louie that hit highs, the real winner of both the comedy battle and the battle for political accuracy was Veep (a follow up to The Thick of It). 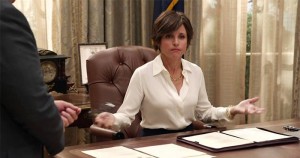 Chronicling the misadventures of Selina Meyer, an isolated and irrelevant Vice President who through time finds herself as President and presiding over an election for her political life led by a bunch of well meaning (and sometimes not so well meaning) incompetents.  Washington DC is outright poisoned and Veep gets it right, especially with this last Fourth season.

1) No One Knows What They Are Doing in DC

Selena’s most trusted and put upon aide is Amy Brookheimer (played by My Girl’s Anna Chlumsky), her campaign manager by season 4.  After the President hires a yes woman who seems to have no opinions at all as a Senior Advisor, Amy quits in a spectacular blaze of glory telling President Meyer:

“I have bitten my tongue for so long that it looks like a dog’s cushion. But no more! You have made it impossible to do this job. You have two settings- no decision and bad decision. I wouldn’t let you run a bath without having the Coast Guard and the fire department standing by, but yet here you are running America. You are the worst thing that has happened to this country since food in buckets and maybe slavery! I’ve had enough. I’m gone.”

The comprehensiveness of Amy’s tirade will go down in history as one of the most accurate descriptions of the naïve and vacuous political class that seeks to lead America. Donald Trump for some reason thinks he is qualified to run the country and that bombing the few oil fields that the Islamic State controls would be a good idea.  The entire Republican field is no better, being unable to stand up against Trump and call his “policies” the bullshit that they. No one has Amy”s courage.

After a data breech allows a nameless campaign staffer to release sensitive information, the Meyer administration must respond.  This leads to one of the funniest and truest interactions on the show.

Selina “So who is next for the guillotine?”

Dan “Jonah Ryan. I have been fattening him up for just this occasion.”

Later in the season after Dan is eventually fired, Congress asks why someone who had no relation to the breech went down, the Chief of Staff responds.

This is often the tragedy of DC, often the person sacrificed has no relation to the problem.  We online casino gids have seen this recently when Katherine Archuleta resigned for the OPM hack.  That she was not in control of the digital infrastructure of the country was not the problem (or maybe it was), someone needed to be sacrificed and it had to be her.  The reality is that heads need to roll in both the Department of Homeland Security and the National Security Agency, we need a larger grand strategy for cyberspace that does not depend on trite claims.  Our digital infrastructure is weak and chaotic.  Often incompetent.  That Archuleta had nothing to do with an outside contractor being compromised, losing their security credentials, and these credentials eventually leading to the OPM attack does not matter.  We set fire to the “Wicker Archuleta,” an otherwise competent and successful Latina activist.

A significant part of Season 4 of Veep not only chronicles Selina’s efforts to be elected, make her daughter likable, and get past the time she almost hooked up with her VP nominee, it mainly focuses on her failed Families First bill, a horrible piece of legislation that one Congressmen points out is made irrelevant by its own amendments.  The legislation is so bad, she has to kill her baby and sends her inept employees out to do it, which of course backfires.

This happens too often in politics and shamefully, it happened in the Greek situation with the Syriza government likely being surprised they actually won their referendum on European banking.  Now having to come through with this plan of “increased bargaining” power, the Government has to accept a deal that is worse than the one rejected two weeks ago because they lost control of the process they started.

Veep is to too prescient for its own good.  A devilishly accurate reflection of Washington politics, and politics in general, the Emperor often has no clothes and is lost without her Italian lotions.  Watch it, I leave you with their best insults.