The electoral college victory of Donald Trump has been devastating for too many reasons to count, from the impact on the middle class, the poor, minorities, and even Texas. This man is a threat to our nation’s well-being economically, politically, and socially. Those saying everything will be alright need to wake up the dire threat he and his team of deplorables are to ethnic minorities, people of color, women, the LGBTQ community, and other diverse groups. But we also must investigate the foreign policy impact of President Trump.

The team that Trump will appoint will be full of the scrubs and discards of the Bush Administration, in fact it is often made of those too extreme to even serve in polite society.  Instead of draining the swamp we are restocking it and throwing a few non-native invasive species in for good measure.  From John “lose ten floors of the UN” Bolton, to Sarah “you can see Russia from Alaska” Palin, to his team of Russia sycophants who will likely trade Ukraine and the Baltics for Russian support on our war against the Islamic State, nothing good can come from this election from the foreign policy perspective and this has a direct impact on the work we do as IR scholars. We must deal with this issue in our research. 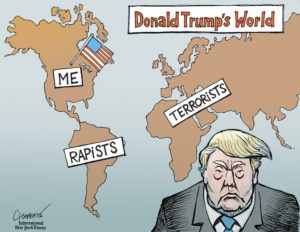 There has been an intense push to engage in policy related research recently.  I have fallen into this group and the macro-perspective of my old career in Conflict Studies looks pretty appealing now. Most of my scholarship now engages cyber security related questions. This rising security concern is critical national security threat, but saying that does not mean that we have not overblown the urgency, tactics, and solutions to the problem.  Along with my coauthor, Ryan Maness, we have advocated an empirical-inductive theory of cyber restraint. We have written on this topic in many places but the simple summary is states have refrained from engaging in massive cyber warfare despite the capabilities, will, and urgency to do so because of the consequences of action and norms against such violations. Our own networks are insecure, attacks in this domain will likely bring about responses that might be more devastating than the initial moves. We have observed this pattern since 2001 and continue to see it in operation.

The best recent example would the threat of retaliation against Russia for the hacks on the DNC.  NBC News seemed to breathlessly report a coming cyber response but the actual response has been much more benign and proportional. We encouraged Ecuador to shut off internet access for WikiLeaks, the distribution method of information after Russia’s hacks, and have seized money connected to Russia Today, the mouthpiece of Russian propaganda, but only in the United Kingdom. These actions are measured, proportional, and restrained. They are appropriate and have served notice that these violations are unacceptable and we will respond when such actions occur, but our response was not one likely to provoke escalation.

In the age of Trump, can we expect this to be the outcome in the future?  This man questioned the veracity of reports that Russia hacked the United States even after private intelligence briefings. The man has said his 10-year-old son might be the solution to our problem of ISIS (no really) because he is great with computers.  Finally, he has called for crippling cyber capabilities, as if the United States does not already possess these capabilities, because the delicate nature of cyber security is just too quiet and we need things to go boom.

How do we operate as scholars in an age when all our assumptions about a clear and rational solution to our world’s problems is in jeopardy?  How does one undertake research and experiments on environmental issues when the new head of eh EPA will someone who denies climate change.  How does one investigate NATO when the President Elect does not even understand the purpose and workings of the body?  As much as people might say the opposite, we generally understand that Russia, China, and the United States generally try to do their best and their have their interests at heart when they act. Is this something we can expect of a Trump administration?

There is the hope Trump will be moderated, that there will be people who will take his Twitter account away when things get bad. But we cannot trust in this moderation, we cannot trust in rational policy when the man made a series of 500 lies during the campaign. The new era of engaged social science scholarship is in jeopardy because the uncertainty ushered in by this election; it must make us question our assumptions, models, and beliefs if we are engage in policy orientated scholarship.

This might be a good time for a bit of soul searching and reconsideration. I for one will not return to macro analysis safe from the influence events that happen in the moment, like Trump. It is more important than ever that we engage in policy orientated scholarship but now we must add a tinge of normative and critical political science that will help us question the nature of our choices and data. This might be a new day for scholarship, we must confront the challenge head on.