Old Cairo, Modern Cairo, and Revolutionary Cairo all clash in devastating and fascinating ways. This blog will serve a bit as a travelogue and observations about political events, but I have nothing really profound to say.  I am not an Egyptologist and have not spent much time studying revolutions. 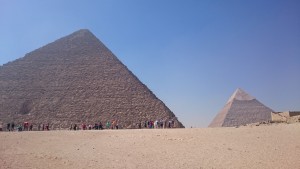 Egypt is not in chaos, but it certainly is not stable.  The recent decision to condemn the post-Revolution leader Morsi seems problematic, to put things mildly.  What is even more confusing is that basic information, like what time it is in Egypt, is open to interpretation. Sisi decided to forgo Daylight Savings Time, an interesting choice in that every clock, cell phone signal, and internet resource gives conflicting advice on what time it is.   Egypt is basically an island in time, different from its neighbors.

The primary reason to visit Cairo remains the pyramids, sites incredible to see to this day and the last of the ancient wonders to still stand. Everyone should see them at some point, the size and scale is impressive. What is even more impressive overall is the statement made by them and their enduring nature. Some are as old as 5,000 years and they still stand massive testaments to human ingenuity and creativity. 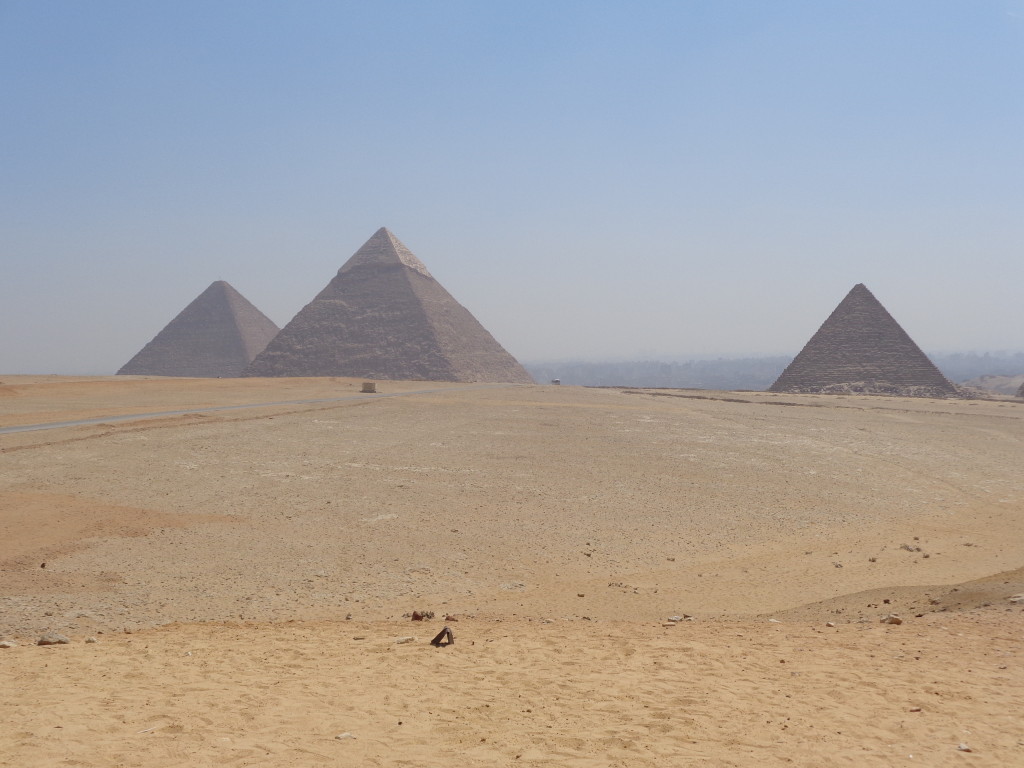 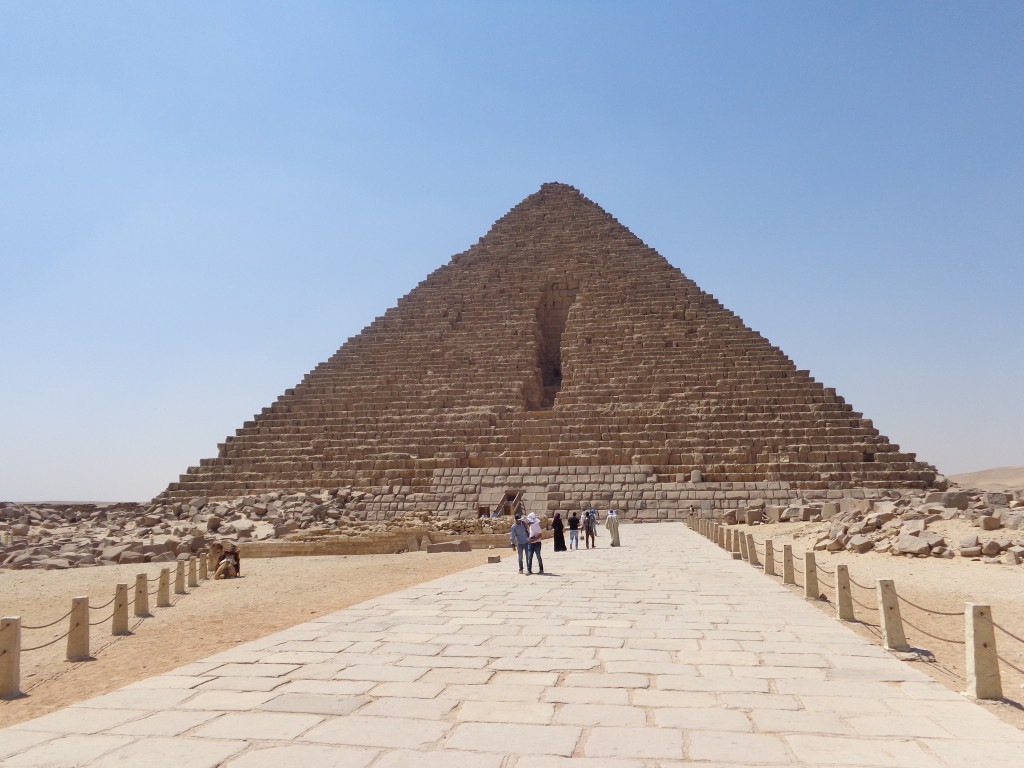 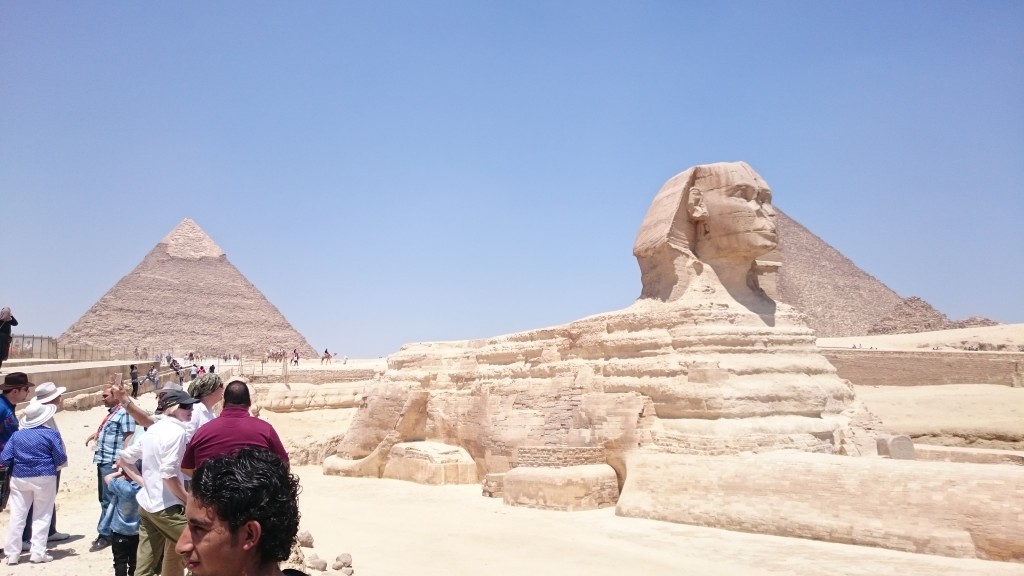 The guides make it a point to reinforce the idea that the pyramids were built by paid volunteers, and this is likely given the hieroglyphs, but we can never be certain that all the builders were voluntary.  This generally fits into the idea that the Egyptian is not to be dominated or controled, they allow their rulers to rule with consent, even to this day and the narrative holds.  But who is really in control?

The most troubling part of the pyramids is the lack of any real security.  The tourist police are there, but they seem sleepy and inactive. They point their weapons every which way, including my friend’s head while they searched his bag.  I was assured that their weapons are not loaded, but that begs a deeper question, what if something does happen as it did in Tunisia and they are needed.  Make no mistake Cairo is safe and the Egyptian army feared, but so was New York City in 2001. 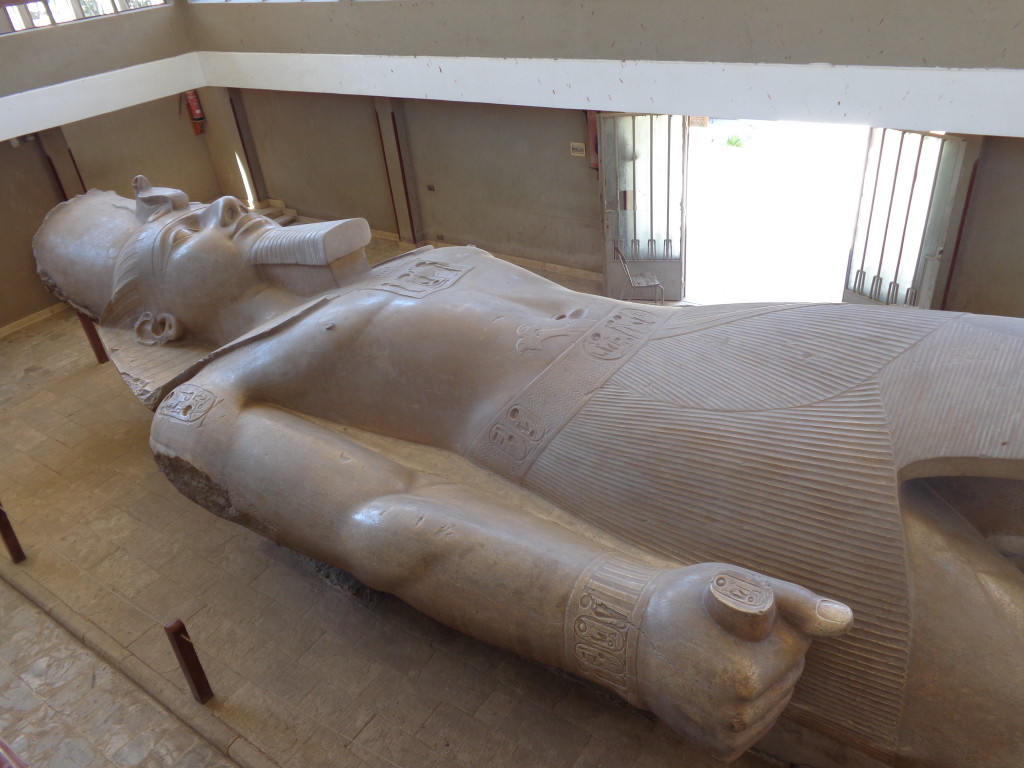 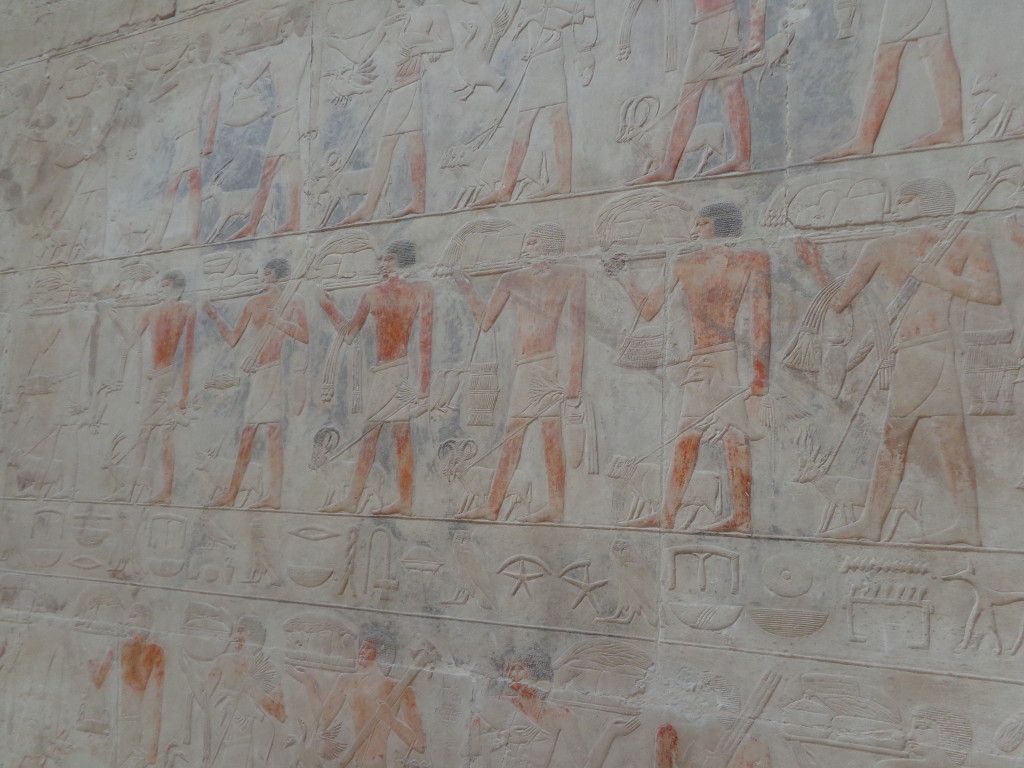 The Arab Spring and the revolution are spoke of in almost spiteful ways. We heard the term Arab Winter more often than Arab Spring. For the Egyptians, the revolution in 2011 was an important and hopeful event.  An event that only got them something worse and they reverted right back to the stability of the military, the dominating institution in the state.  Yet I do not see stability. Traffic laws are not obeyed, civil law seems to have no force. Prices depend on the whim of the vendor and the American dollar is almighty.  The casino at the Hilton takes no Egyptian Pounds.

Studies over and over suggest that to complete a revolution or transition, there needs to be some hope and I see no hope in Egypt.  They are happy with some form of stability, but this stability is precarious and seems to be a bit of a powder keg.  Flirting with Russia will not help matters given the likely negative consequences for the Egyptian-American relationship. Their relationship with Israel is complex (to put things mildly) and the continued closed border prevents Palestine from getting aid.  All these issues will come to a head at some point.  The tension of Islam, the American support, the Russian support, and the duplicity of supporting Israel over Palestine.  Each issue festers. 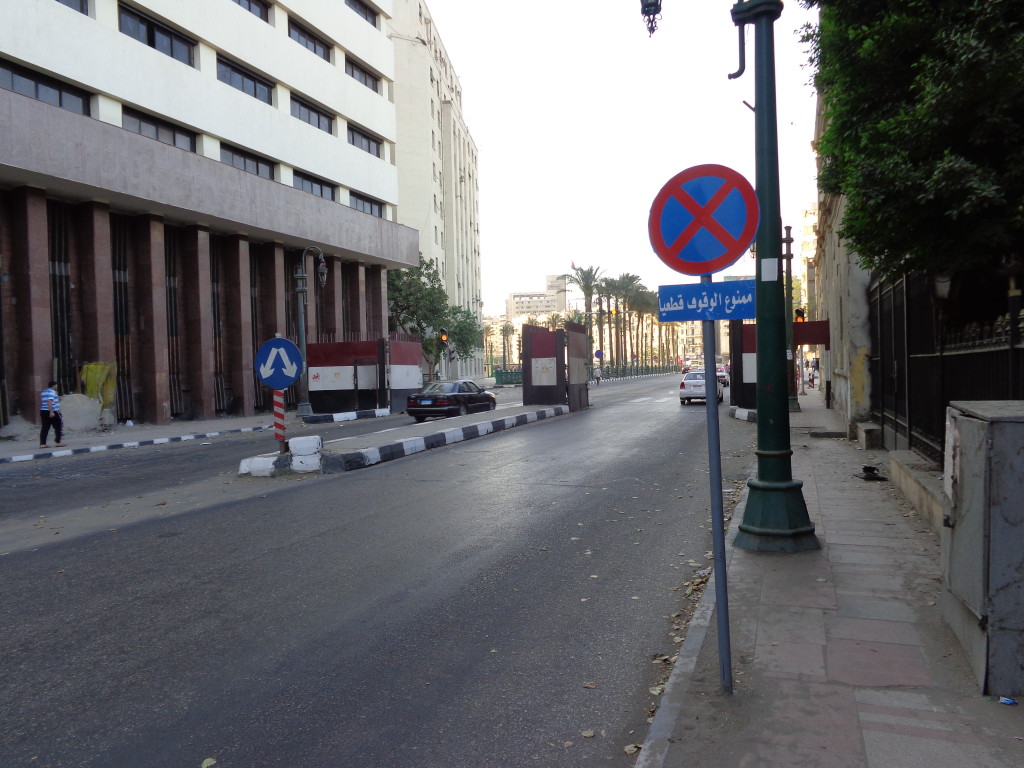 large gates installed to stop protesters in the future 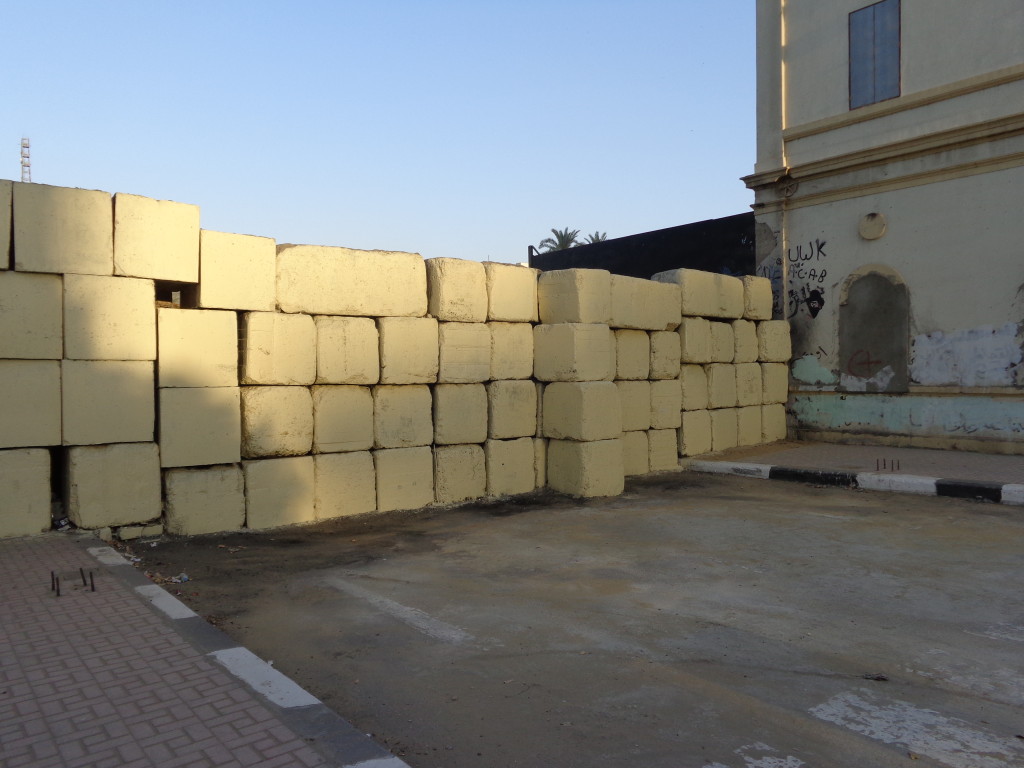 The stains of the revolution remain and I apparently went to great lengths to take these pictures.  At one point I was stopped by an undercover operative for taking pictures.  I played dumb and walked away, lucky to not get three hours in an intelligence center where Googling my background would not likely have helped matters. 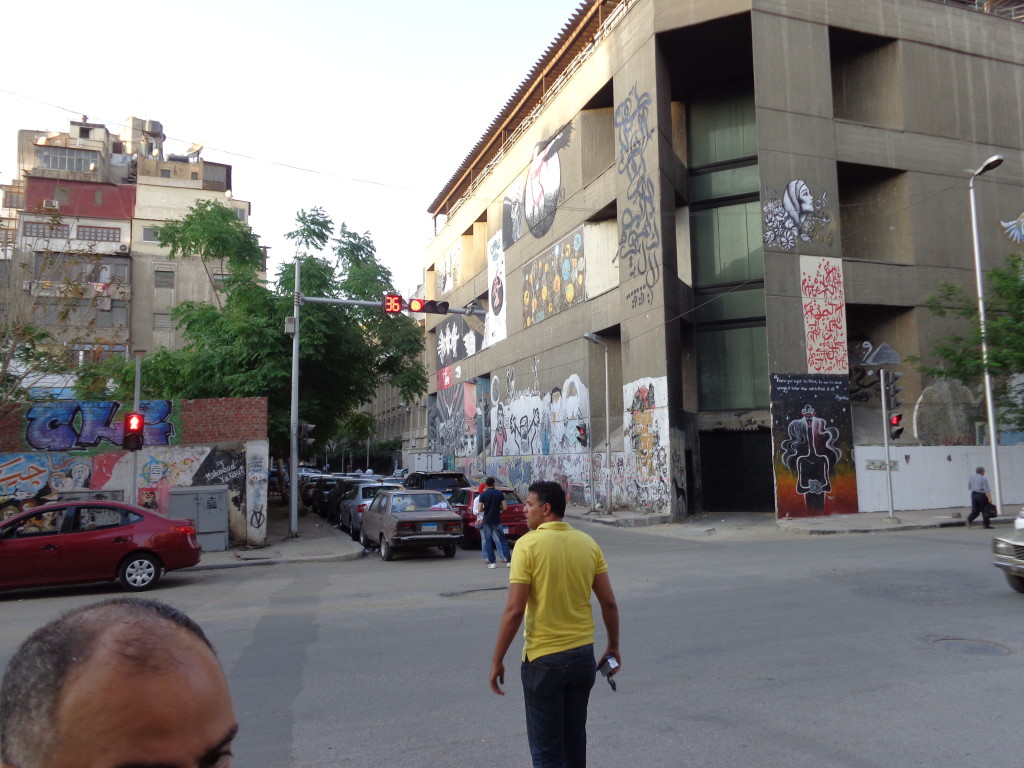 Political Cairo stands tall in the walls and alleys, but it also seems to cover up the horrors of the revolution.  It’s not really clear what is behind the graffiti.  Would that be new facades covering up the bullet marked walls of old? Or newly painted walls covering up the traumas of the events in 2011. 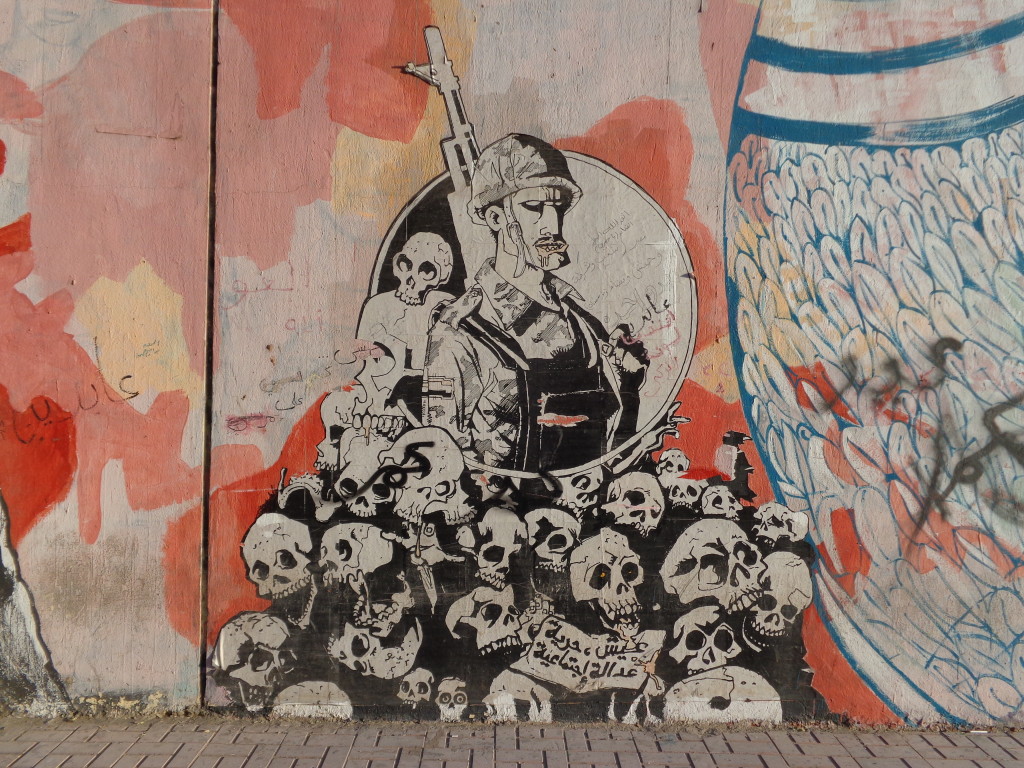 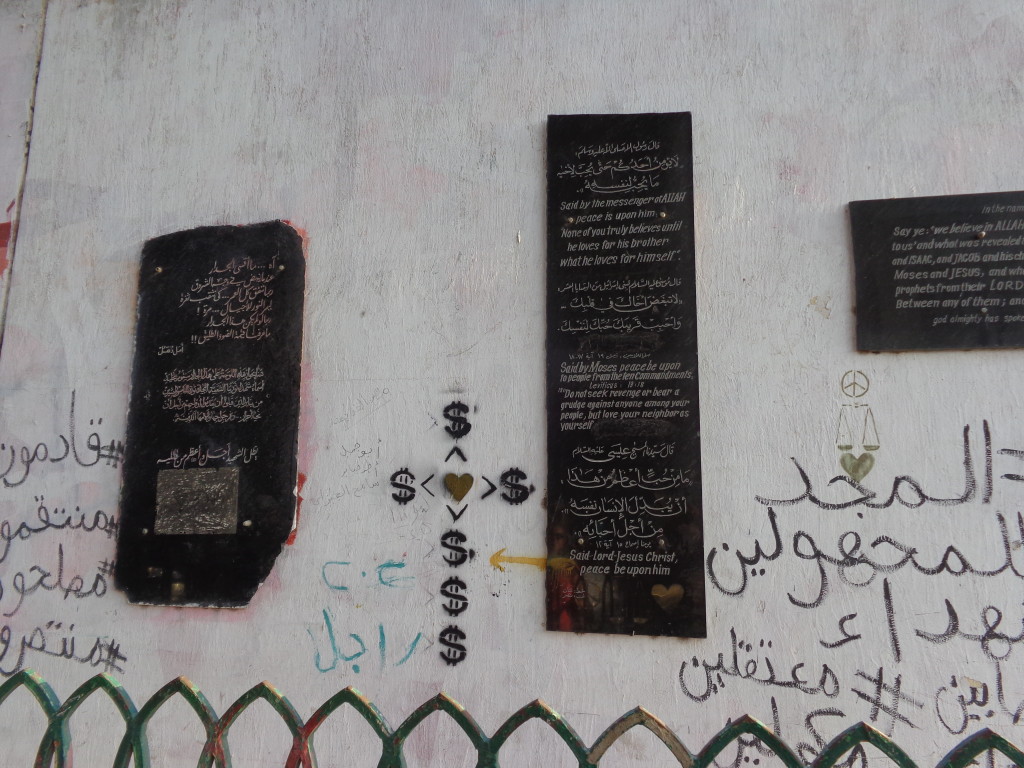 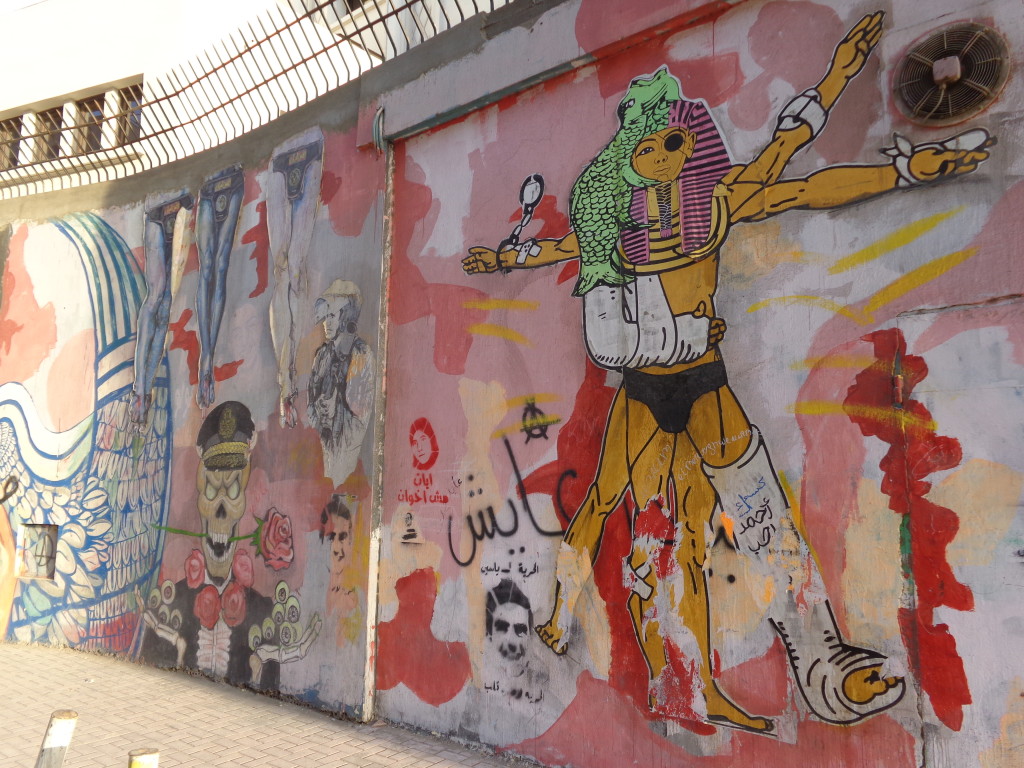 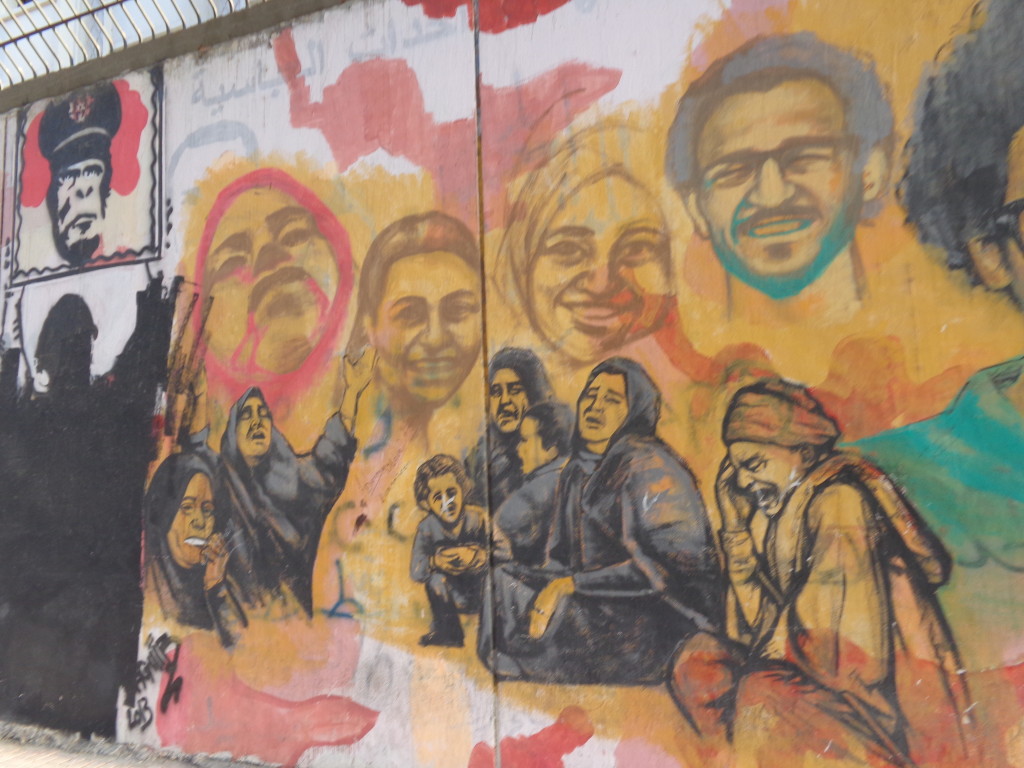 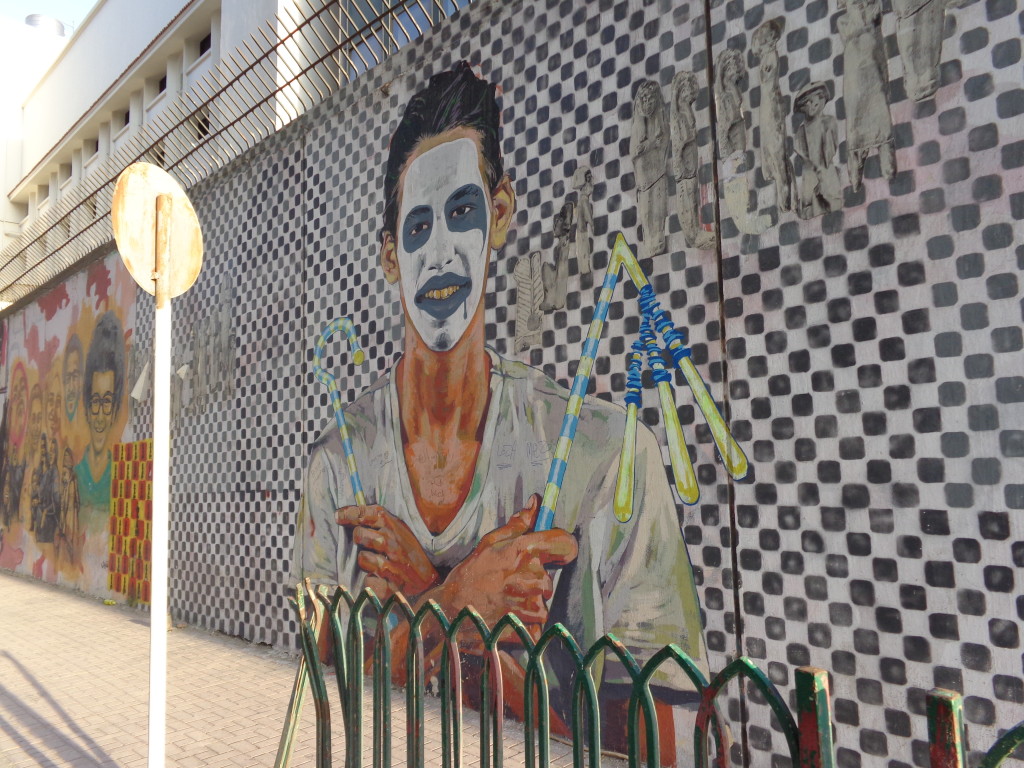 Barbered wires and barriers remain, just about everywhere.  The city is ready to be locked down at a moment’s notice.  There seems to be a whole regiment of tanks hidden behind the Egyptian Museum and in Tahir square.  There are machine guns and blast guards everywhere, the Egyptian military is prepared, even if the tourist police is not.  This is concerning since it suggests there is more care given to internal threats than external ones. 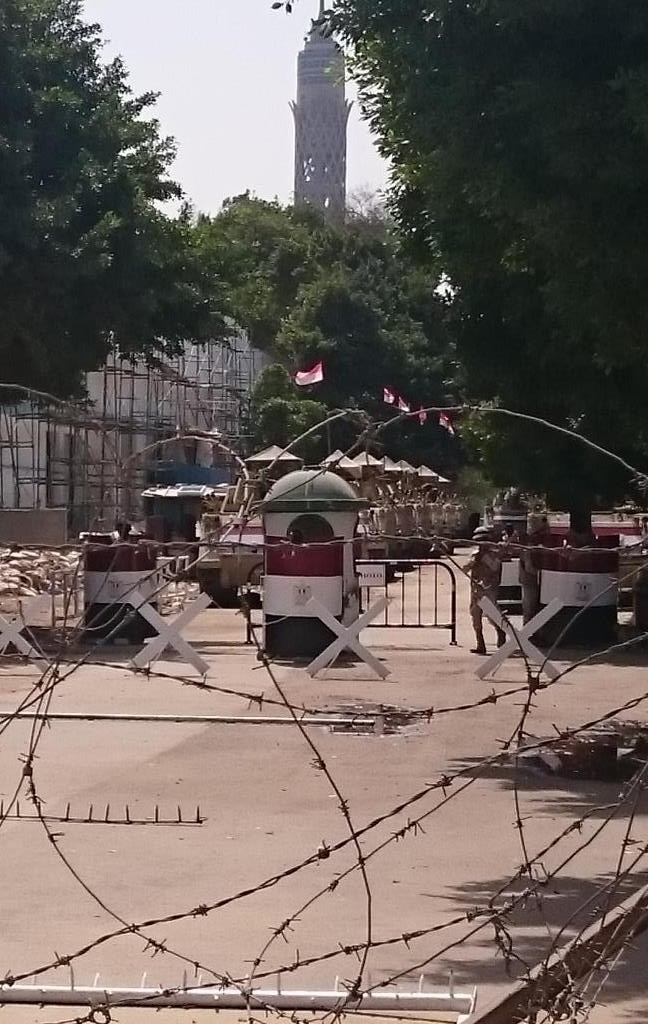 Line of tanks next to the Egyptian Museum just by Tahir Square, amazed I even got this shot – had to zoom in from a pic far away 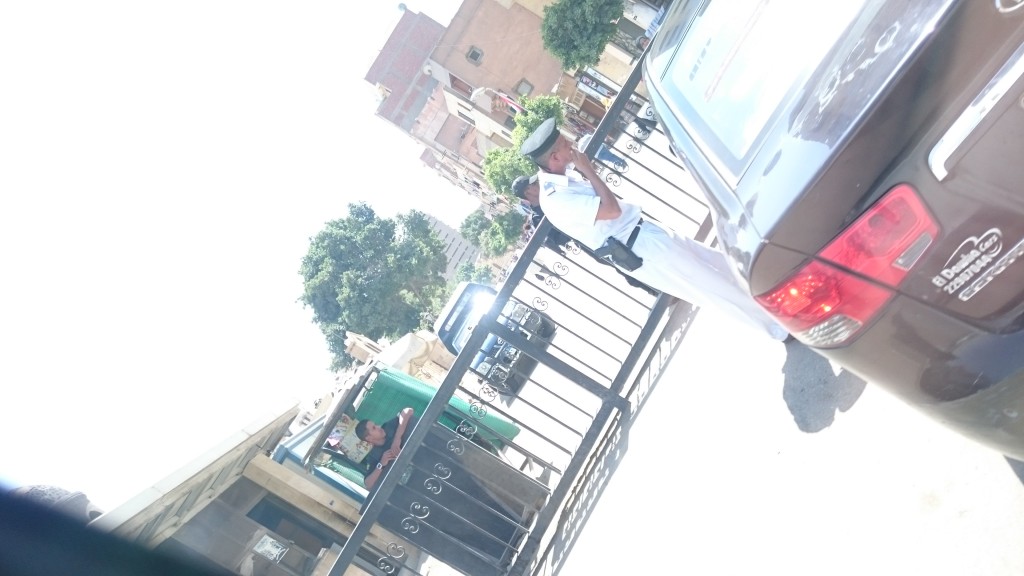 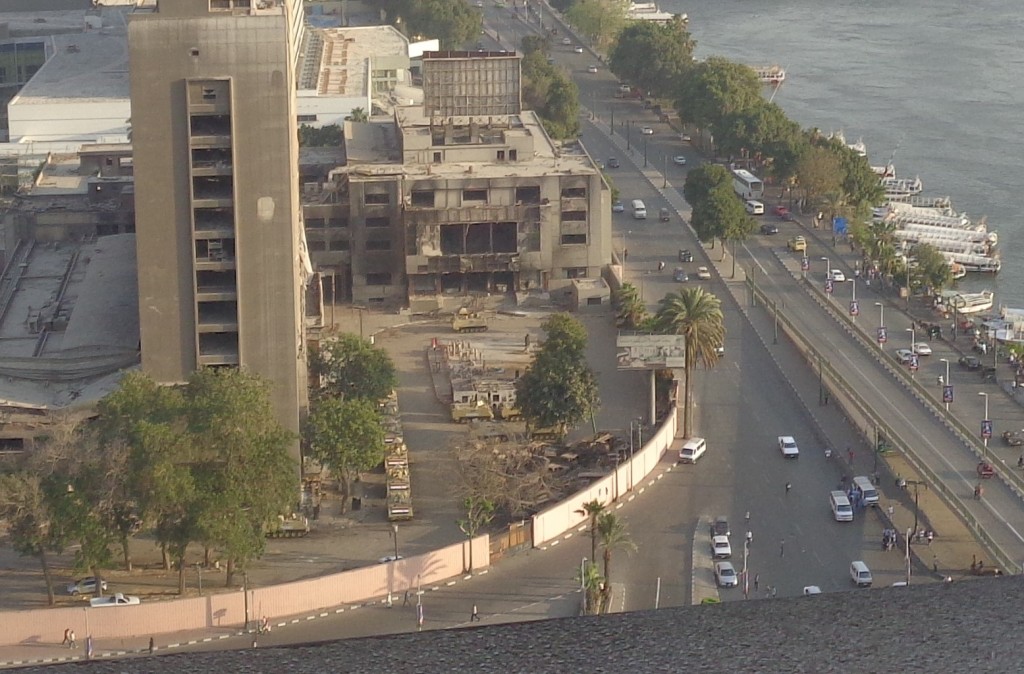 View tanks after they moved from the Hilton

The Nature of Identity

It was often said to me that all Egyptians want to leave as soon as possible, but they are unable to.  Most skilled works seem to be exploring options away from the country, but their options are limited given their status.  Expats are in an envious position of being in town by choice and able to leave at any time.  Others are no so lucky.

What was striking to me was the fluid nature of identity.  Everyone through I was Egyptian, to the point that they would violently yell at me if I did not answer back in Arabic.  Their assured nature in addressing me was confusing, given my clothes and general appearance I would think they might give pause if I failed to answer in Arabic, but they seemed more determined despite apparent obstacles.

I do recommend that everyone goes to Egypt at least once in their lifetime.  It is safe for now and likely will be continue to be safe.  But take precautions.  Bring American Dollars (even if you come from Europe).  Hire solid and young tour guides that will protect you in case of danger or from the salesmen trying to pass off shoddy trinkets.  Be aware at all times, not so much of thieves and violence, but any flares in violence in that the police and military are around at all times and they generally do not seem that well trained. 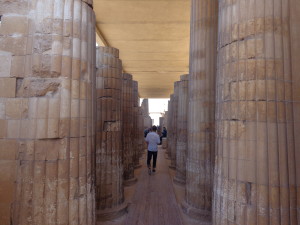 My trip to Cairo was incredible, and thankfully short.  Giza, Memphis and Saqqara can be done in one day.  The Egyptian museum and Old Cairo in another, heading out the next for Luxor (which we did not visit) before returning by plane to Cairo on the way out.