Many if not most of us live some portion of both our professional and social lives on Facebook. Among my friends and colleagues, a significant amount of attention is paid to how to ensure privacy on Facebook, but less attention is paid to self-expression and self-description options. That’s certainly true of me. That’s why my latest discovery has me thinking. 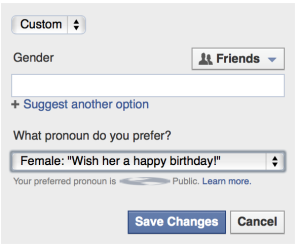 Facebook has a bunch of gender options, apparently rolled out in early 2014. Its been a while since I’ve updated my profile, so I didn’t notice until now. My first reaction is to be like a kid in a candy shop – which one do I pick? Can I have them all? I’d previously decided not to display a “gender” on Facebook because the options were limited to male and female. Granted, this list still blurs the sex/gender dichotomy and doesn’t make the pronoun “ze” available, and while I can ‘be’ a number of genders, I can still only be ‘interested in’ male or female (or both). Still, upon my initial encounter with this list, I was too elated with all the options to be particularly concerned about those remaining shortcomings.

Then it occurred to me – does this translate? Is it available everywhere in the world? Is it available in all of the languages that Facebook is available in? Are translations based on English words, or local ones? These questions lead me to other questions – what privileges are a condition of possibility for my joy and excitement at the discovery of the ‘new’ Facebook genders? Who does facebook’s new genderqueer face benefit?

It turns out that, for the most part, it doesn’t translate. I tried about 30 of facebook’s available languages, and the only other one that had the “custom” option was French. The options are apparently available anywhere in the world if your profile is in English or French. If you change your pronoun choices while your profile is set to English, they will remain when you translate your profile back to another language – and any pronouns will be translated, though the words will not (when I changed my profile to Spanish, the “and” becomes a “y.” The words in French seem to be translations of the English words rather than locally derived, but the UK gender options (which became available four months after the US gender options) do have some local customization. So, anyone whose profile is not in English would have to do some tricks to have access to the option to have a “custom” or non-male-or-female gender.

Which is not to say that Facebook didn’t take a big step choosing the words that they did, making them available, and locally customizing them in the U.S. and in the U.K. But in most languages available (I only tried about 30 and then got bored), the options remain “male” and “female.” This is especially odd for languages like Hindi, in which the terminology for more than two genders has been around significantly longer than Facebook has had a pull-down menu for them. I really hope that Facebook comes up with a way to proliferate the availability of identity options across languages with some expediency. Right now, the privilege to identify as neither male nor female is English-and-French-only, and an overwhelming majority of the world’s population (and probably of Facebook users) do not live in a place where either is the dominant language.

When I started thinking about translatability, though, I started thinking about friends and acquaintances from around the world with whom I have talked about sex and gender, and even sex and gender words. One friend asked me what ‘queer’ meant, and told me there was no word for that in her native language. Another told me that the vocabulary for non-conforming genders and sexualities where he is from is entirely in code, so it remains undiscovered by friends and family members. Another acquaintance told me that homosexuality is illegal in his country, and punishable by prison time and possibly even death. In his country, it would be unsafe to identify as something other than male or female.  Another friend explained to me how s/he was happy that there were not all of the complicated words for gender in her language that there are in English – that s/he felt liberated by not having to choose or self-identify as a particular thing to the exclusion of others.

So I started thinking – my joy at the addition of all of these genders on Facebook is a place of privilege. It is a place of privilege because having my profile in English is my first language, because there is little or no material risk to my body or my livelihood if I choose any of these wonderful ‘new’ terms to describe myself, because I am familiar with many if not all of the terms listed, because I don’t have to talk in code, and because I feel like choosing a gender identity is a privilege rather than a constraint. But when Judith Butler asked for whom the privilege of out-ness was available – she could have been referring to this, which is laced with race, class, nationality, gender, sex, and sexuality bias in availability of the privilege.