This New York Times piece on Russia’s use of power in Syria was so notable for its hyperbole and exaggeration, it woke me from my RI slumber.  As my old friend from UIC, Evan McKenzie noted “For the US media exaggerating Russia’s military power is a reflex.” It truly is in this case, the article is so bad that it could have appeared in Russia Today.  Lets cover it by using the NYTimes’ own words.   Mine are in italics 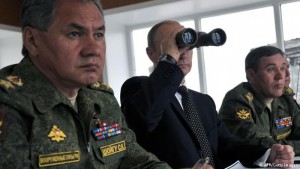 “Appreciation of the transformation that Russia’s military has undergone under President Vladimir V. Putin, showcasing its ability to conduct operations beyond its borders”  Well, good to know that the Russian military has a handle on this whole external use of force idea.

The NYT seems impressed with cruise missiles that most modern military’s have had since 1990  “A ship-based cruise missile fired more than 900 miles from the Caspian Sea, which, according to some analysts, surpasses the American equivalent in technological capability.”

Funny enough, they had to note this later in the piece – “Despite the loss of four cruise missiles that crashed in Iran in one salvo, they represent a technological leap that could prove worrisome for military commanders in NATO.”  Umm yes, the showpiece technology cannot even hit the right country.  Could the Scud missile be more accurate?  Foreign Policy.com covers this issue a bit more noting that Putin’s smart bombs are not at all smart.

“That coordination reflects what American officials described as months of meticulous planning behind Russia’s first military campaign outside former Soviet borders since the dissolution of the Soviet Union.”  Apparently coordination is something notable for Russia.  Napoleon would be amused.  And we are just going to ignore Ukraine (2014-2015) and Georgia (2008)?

“In a report this month for the European Council on Foreign Relations, Gustav Gressel argued that Mr. Putin had overseen the most rapid transformation of the country’s armed forces since the 1930s.”  You mean after they purged their entire military of Trotskyists? Great bar for success, not to mention that time Stalin almost lost his entire country by 1942 and refused to come out of his room for days.

In an effort to illustrate advances, the NY Times compared Syria with Georgia.  “The Russians lost three fighter jets and a bomber on the first day of the war that August, and seven over all, according to an analysis conducted after the conflict. Russian ground forces suffered from poor coordination and communication, as well as episodes of so-called friendly fire.”  While its probably important that a military stop killing its own troops, their lack of losses in this battle are likely because the rebels in Syria have no aircraft (a fact Ben Carson had to learn to many people’s amusement) and were assuming that Russia was coming to attack ISIS as they had said publicly.

Apparently an American general is impressed with Russia’s ability to move 2,000 troops into Syria.  “Russia set up its main operations at an air base near Latakia in northwestern Syria in a matter of three weeks, dispatching more than four dozen combat planes and helicopters, scores of tanks and armored vehicles, rocket and artillery systems, air defenses and portable housing for as many as 2,000 troops. …“What continues to impress me is their ability to move a lot of stuff real far, real fast”  As Bill Ayers notes in another RI post, it was 600 miles!

“Russia is not only bringing some of its most advanced hardware to the fight, it has also deployed large field kitchens and even dancers and singers to entertain the troops”  Well then, as long as the Russia version of Kathy Griffin is there…

Notice also how the article makes no mention of Russia’s vaunted hybrid or cyber warfare capabilities.  Instead we should be impressed Russia is able to move what are really 600 troops 600 miles, shoot cruise missiles into the wrong country,  and avoid friendly fire?

The narrative on Syria is borderline ridiculous.  Supposedly Obama has lost credibility and power, while Putin wins the great prize of Syria at the same time making the humanitarian catastrophe worse.  When will the media give up on this narrative of force makes right?  We should know better by now.