A few days ago, I posted with a strong reaction to Inside Higher Education’s framing of female political scientists as angry. I think that my reaction was quick and strong both because the piece and conversation warranted it, and because it wasn’t anywhere near the first time I’d had to deal with the “angry woman”/”angry feminist” trope when there is a reaction to gender injustice.

If fact, in December, I posted one of two really important conversations that I had at the “What’s the Point of IR” conference at the University of Sussex – one with Patrick Thaddeus Jackson on epistemology, ontology, and (sometimes) God. The other important conversation I didn’t write here about, because I wasn’t yet sure what to say. That didn’t stop me from tweeting about it real time, though. I’ll show you my “angry” reaction first, and explain the conversation after. 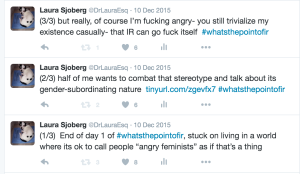 So, I’ll tell you a (brief, four-month-old) bit of context. I won’t identify the people in the story, though they are more than free to identify themselves if they’d like. A speaker who was discussing the Eurocentric nature of IR was asked a question by a (female, feminist) member of the audience. The question was why the story of IR’s Eurocentrism did not include a story of its sexism and heterosexism as well. I didn’t listen to the whole answer (see previous very interesting [to me] twitter conversation with Patrick Thaddeus Jackson). The part of the answer that I did here, though, caught my attention, not just then but fully for the next two days and off and on for the coming months.

The part of the answer that caught my attention was that the substance of the answer had previously been given to “an angry feminist” who wasn’t satisfied by it, and the speaker didn’t understand why. The speaker did not seem to be using those words as a parody, or to be poking fun at himself. Instead, the sentence seemed to be meant literally, and a straightforward explanation of the position he saw himself (and the “angry feminist”) in vis-a-vis the field. A few more questions were asked on the point (this exchange happened in the early afternoon if I remember correctly), and didn’t bring about any real resolution. Mine weren’t the only angry tweets, though I missed it if anyone else got as colorful as I did in their descriptions of and reactions to the situation.

In those tweets and in my presentation the next morning, I was the “angry feminist.” I justified anger from years of mistreatment, trivialization, intellectual shortchanging, and personal belittling – not (only) towards me, but towards women and femininity in disciplinary IR and in global politics more generally. I justified that anger because anger at injustice is justified, and trivializing and gendering anger is itself injustice.

I’ve been accused of reifying the stereotype that gender scholars are humorless by expressing being appalled at the casual nature of gender and sex subordination in the discipline and in the world. I could defend myself by suggesting that I have both a sense of humor and a generally laid back outlook on life – and those who know me will understand that to be the case – but that’s not the freaking point. The point is that you don’t have to find gender subordination funny to be cool (in fact, I think its not cool to find it funny), and you don’t have to remain calm in the face of injustice to merit that injustice being solved (in fact, its perfectly fine for injustice to piss people off. It is, in fact, unjust).

My use of profanity in those tweets (and the next morning in my talk), and my performance of anger, then, was meant to express simultaneously how not ok sex and gender and race subordination are, and how not ok it is to stereotype anger about those subordinations to perpetuate them. Perhaps the speaker in Sussex and/or Scott Jaschik did not mean to link up with a long tradition of subordinating women and trivializing anger/expecting calm, but both did. I could have reacted calmly and explained the problem (in both instances, I did do some explaining), and some would suggest that’s the appropriate reaction – I’ve been instructed more times than I can count in my life not to play into this or that stereotype. This is what I wanted to say that day, and what I’ve wanted to say most days:

Fuck it. Its the stereotype that’s the problem, not me. You have a problem with angry women? Quit fucking pissing them off. You have a problem with people who are fed up with injustice? Fight the fucking injustice. You think women are too emotional? Spend your whole life getting treated like one. You think that feminists are just too damn angry? Lend some of your good cheer to sex and gender equality. You upset you got called out for accidentally doing something deeply problematic in terms of race, gender, or sexuality? Agree with the call-out. Need a g-rated, easy-going world? Imagine the privilege that made even that idea possible for you.

I know that’s rude. I know its profane. I even know that it is over the top, and that it relies on a bunch of dichotomies that aren’t nearly as simple as I put them in the passage. That’s the point. One shouldn’t always be expected to have a reasonable response to unreasonable abuse – even if reasonableness itself wasn’t a sexed, gendered, and raced concept. Looking to control “ladies'” anger, and expressing disdain at hysteria, is downright 19th century. Even if the term “angry feminist” didn’t exist back then, it is those tropes that it is drawn on, and that world in which the apparently reasonableness of that phrase should stay. That’s true if its used at a conference, on a blog, on social media, or just in one’s head.