Jon Lindsay over at PV@G said most of what needs to be said about Eye in the Sky. I will only make a few points but mostly reiterate the need for any IR scholar to see this movie. It is frankly incredible but it is also a “hard watch.” It wasn’t exactly the best movie choice for my last day in Los Angeles, but it is something that needs to be seen by those in our community. 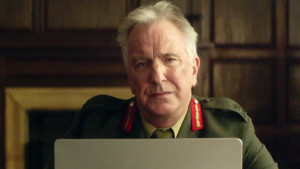 The movie is mostly about collateral damage, but also about technology and war. One point I liked was that it demonstrates there is a clear need for traditional intelligence to supplement new forms of technology. We often forget the collaborative environment modern technology needs to operate in, assets on the ground are often key.

Much in this movie is about coalitions and multilateral responsibility, Saideman would be proud and has much go to on given the intense chain of command debates or attempts to abdicate responsibility.

The tag quote above is uttered by Allan Rickman, RIP, who gives a great (last?) performance, as does Helen Mirren, Aaron Paul, and Barkhad Abdi (from Captain Phillips)

The movie also highlights to potential impact of drone operations on the flight officers. It is not easy for them to do their job, and might be worse than conventional operations as surveys have suggested.  They have to do their jobs and then get right back to it in 12 hours, all the while dealing with normal life in between.

I am not sure how much of the movie is propaganda and how much is truth. Is there a difference at this point?  All my interactions with the military tell me that this is the truth, that we really do take into account the legal and moral issues of combat operations. But how standard is this view?

Some interesting gender dynamics with Helen Mirren in charge of the mission but Emily Mortimer playing the common construction of the concerned woman in the room. I think this is the weak point of the movie, but all in all, it is pretty balanced even on these points, but this is not my area.