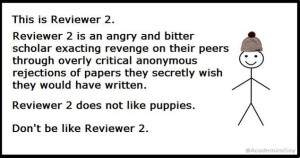 I have seen this on Facebook a number of times over the last couple of weeks, and it has really resonated. Especially since Reviewer 2 doesn’t like puppies. And I love puppies. I mean, after all, who can resist my puppies?

But this “Don’t Be Reviewer #2” stuff made me think about how much of professional development advice in the field comes down to “don’t be an asshole.”

“Don’t Be Reviewer #2” is more complicated than “don’t be an asshole,” of course – but a lot of it is that. Sometimes I tell people I know who do not work in academia about how academics behave towards each other, especially in anonymous situations, and they don’t believe me – they wonder how people who are otherwise intelligent can say and/or do such appalling things.

I started to wonder – is there something about the field that turns on the “asshole” button? And are there ways we can turn it off?

Professionally, this job is both very competitive and very solitary – things that might desensitize us to the effects our behavior might have on each other. Above and beyond that, many of our anonymous situations seem to feel like there’s little chance of getting “caught” – if you are Reviewer #2 – if you write something angry and vengeful – maybe one or two people in the field will ever know it was you. And even those people – mostly the journal editors – will be bound by professional ethics not to tell. Even deeper down the rabbit hole, we spend so much time convincing ourselves that the personal is not in our research that we might not be able to see when our judgments are motivated by insecurity, vengeance, or other emotional reactions.

But, at the end of the day, checking our inner asshole at the door (or before the login) does not seem to be such a monumental task. And, as a journal editor, to be completely honest, there are not that many “Reviewer #2’s” – most people give detailed, very polite reviews that are generally helpful or mildly misdirected. Some others don’t do their due diligence, providing reviews that are hurried, short, or lack detail. Very few people are “Reviewer #2.” Most of us, I think, … I hope … have “don’t be an asshole” down in the reviewing department. But there are “Reviewer #2’s” out there. And many of us (myself included) have failed the “don’t be an asshole” test at least once.

I’m not sure I fully comprehend why or how it happens each time it does. But I’ve been trying an experiment over the last month or so – I’ve been thinking of my professional behavior as measured by the “asshole” test – every time I make a decision, I’ve been wondering what its adverse effects are, and on whom. I’d like to think that’s making me a little bit better of a decision-maker professionally.

As per reviewing, Sara Mitchell’s recent advice about writing high-quality reviews, I think, is very helpful. As my post series on the Duck of Minerva several years back suggested, it is important to try to understand the underlying assumptions that the author makes when reviewing an article. I think writing reviews that you would like to read, and that would be helpful to you, is a pretty good tip. But, when in doubt, use the “don’t be an asshole” rule – either when reviewing, or more generally in professional interaction. Thinking of it in those terms might make less “Reviewer #2”-like-sorts in the world.