Movies are important teaching tools in the field of International Relations.  We have to be honest with ourselves; students now are less inclined to read assigned materials.  On top of this, visual media and active learning techniques have been demonstrated over and over again to be more effective when compared to traditional methods.   This (past) last weekend Valeriano saw Guardians of the Galaxy and Dawn of the Planet of the Apes, while Guardians was perhaps the most fun, original, superhero movie of the modern era, Dawn was likely the ultimate reflection of important themes in the International Relations field and a seminal reflection on the roots of violence. Dawn will be a useful teaching tool for some time, so we wanted to highlight some of the major themes and issues it addresses.

Spoiler Alerts Throughout.  This article is heavily linked with source material as scholarship.  Unfortunately, only one article or book could be linked for most points, leaving out many important works.

Dawn tells the story of the reemergence of the human race after their near-extinction from Simian Flu, and the San Francisco colony’s first encounter with the more advanced Apes that have enjoyed prosperity since the decline of Humans.  The Apes have built a society, there appear to be levels of social stratification, learning, and fixed dwellings.

Dawn represents the deepest and most penetrating reflection on violence in recent cinema.  What are the causes?  How did the situation of crises between the Apes and Humans develop?  Both sides mistrust the other, but their natural state would be without violence removing some key variables (weapons, desire for territory, resources).  The Humans just want access to a power plant and the Apes want to continue their developing society created without human influence (well, maybe a little James Franco is left in them and all of us…). 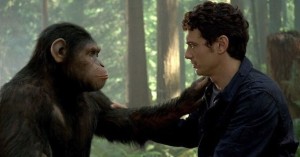 Caesar had learned in Rise of the Planet of the Apes that even when he was loved by a human family there was no real place for him in their society. In the film his status to humans is either that of a very smart pet, or as a newly emergent threat. Acknowledging this, Caesar sought to lead his newly-intelligent brethren away from humans, rather than into direct conflict. Caesar’s position on the separation (excluding mutually beneficial co-operation) of Ape and Human holds until the final scene of Dawn, where living apart in peace is no longer a viable option.  Caesar represents the ultimate accommodationist, desiring peace but overtaken by events.

The genesis of the conflict highlights issues as the foundation of the animosity.  The story of conflict is one of territorial desires or a lust for resources, likely both are key influences on the coming violence.  Territory is key because the conflict starts as Apes discover humans (long thought to be extinct) trekking back from the dam which will restore power to the human colony. Both the dam, and all access to it, is in Ape-claimed territory. They hunt and live there, and their first interaction with re-emergent humans in this territory sees an Ape wounded by human gunfire. Prompted to make a response, Caesar enters the human colony in war-paint and flanked by an army of Apes, and makes clear his demand that humans and Apes live apart and unmolested.

Resources are also critical here because the reason the humans were in Ape-territory was to activate a long dormant power plant.  To revitalize their society, the humans need power (because apparently their iPads still work), as dwindling fuel supplies threaten to turn their peaceful colony into further nightmare.  But like many resource conflicts, there is only a hope of a resource, no clear indication that the power plant still works or it can be rebooted.  Without these two central desires, there is no conflict, there is no movie.  Unlike historical surveys, this story is not one about the breakup of a balance of power or a lust for power, both sides simply want to survive.  When Matthew, (Tall White Dude Who Isn’t Gary Oldman) is given permission by Gary Oldman’s colony leader to attempt to reason with Caesar, he goes knowing that if negotiations fail then an attempt will be made to take the dam by force, putting both Ape and Human lives at risk. Without telling Caesar about the far greater number of weapons the Humans have recently recovered, Matthew is still able to help Caesar see that without peaceful access to the dam, both societies will suffer in the inevitable war. Their demands are not aggressive, but when set against other variables like authoritarian hardliners and military buildups, we see the conflict spiral out of control.

Trust is an important concept alluded to in the movie.  For Caesar and the Tall White Dude, trust is the only bond they have.  Since they trust each other, see something deep within each other, they can cooperate.  The foundation for peace is trust, but Koba and Gary Oldman’s character have no trust.  There is no history of interactions that would bind them together.  Oldman’s character only knows the pain that comes from the loss of his family to the Simian Flu and Koba was tortured by Humans.  Without bonds of trust, there is no framework for peace and cooperation. Interestingly however, the trailers for Dawn portrayed Gary Oldman’s character as being completely lost in his hatred of Apes, and seeking pre-emptive war against them.

Feeding into the failure and absence of trust is the nature of authoritarian rule and win sets.  Caesar tries to maintain order, but he relies on a few key Apes to support his rule.  When these members of the society do not trust Humans and find evidence for their duplicity (guns), they move to eliminate Caesar and all other accomodationist Apes (those who had bonded and interacted with the small party of humans fixing the dam).  Once the accommodationists are removed, the line to war is direct and unavoidable.  But we only get here with issues (territory and resources), a lack of trust, and hardliners unwilling to emphasize with the enemy. 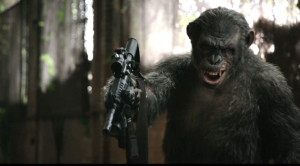 We also get to this point because of weapons.  The Humans pay a visit to the armory in an old fort, building up their arsenal in preparation to move against the Apes if Matthew’s negotiation fails, or if the Apes prove duplicitous.  This is a clear escalation by the Humans, as perceived by the Apes.  The Apes discover this development and use the buildup of weaponry as a step to motivate their internal coup against Caesar and war with the Humans.

A review of Dawn on Grantland cited the main issue between the two sides as technology.  That is perhaps misdirection; it is not technology that is the issue, but weapons.  We see no fights over computers or air conditioners, the Apes don’t care that the Humans might have an iPad that still works.  But they do care that the Humans have guns.  They know what guns are, they remember guns, and guns scare them.  The Koba faction uses the threat of guns, and lots of them, to escalate the conflict.  That the Humans have weapons is step towards war and the only reaction by the apes is to acquire their own guns. A rumoured post credits scene would have shown a damaged human flotilla attempting to enter San Francisco Bay, and regardless of Ape leadership it is now fully known that Apes can use the same weaponry as humans, and have successfully overthrown a human colony. Neither side can now return to a pre-gun world, and humans will now attempt to escalate the conflict even further through higher forms of weaponry.

The final lesson we would suggest that can be drawn from this movie is perhaps the influence of cultural misunderstandings and outright racism.  Humans do not trust Apes, perhaps because of the Simian Flu, but more likely due to simple racism.  They are surprised the Apes can speak, that they can vocalize complex thoughts, it is almost as if the movie were to cut to an old Southerner, surprised that a black person can be articulate.  With deep rooted racism and disgust, there can be no basis for cooperation and reconciliation.  Without this step, the Apes and Humans are doomed to fight.  The movie makes a very clear point about this issue, yet the scholarship in the international relations field is far behind even a movie in covering these issues.

What is left out?  Well alliances for one but that is difficult to conceptualize when there are only two main groups.  Bargaining is not really covered in this framework since there is not much of a bargain to be had, either the humans get access to the power point or there is war.  There is no real degree of acceptance for these two contradictory positions. Gender is discarded, with women playing a minor supporting role or there to only symbolize the family that must be protected.  That Caesar has two sons is surely not an accident.  Race, although addressed in terms of prejudice, is not really covered too well.  The main human villain is a shifty portrayed Latino from the Oz series.  We’d bet on a second viewing, the darker shaded apes would be the most violent. In earlier additions to the Planet of the Apes canon Ape culture becomes entirely stratified, with gorillas making up the military and seeking violent action and often military coups against the chimps and orangutans.  The color tones used for these Apes was not an accident. 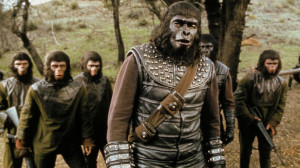 The point to be made is that movies are useful.  They go far beyond their use of High Schools when the teacher used them to cover their hangovers (yes, that is really what they were used for).  In the International Relations field, they are a viable method of illustrating concepts and getting the audience (the student) to both project lessons forward, to see flaws in those lessons, and examine those lessons in other historical time periods, the future, or even alternative systems.  If I were still teaching IR and Film, Dawn would certainly take its place among the pantheon on great IR films like Gandhi, Lawrence of Arabia, Battle of Algiers, and Dr. Strangelove.

*I was a bit pressed for time this morning with deadlines so I did not link to as many articles as I would have liked. I would like to plug my friend Stephen Quackenbush’s new book, International Conflict: Logic and Evidence, which covers many of these themes.