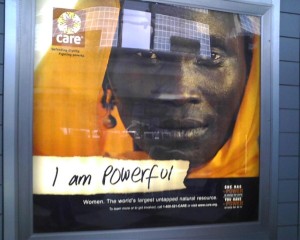 Before 6am this morning, I was wandering (read: running) through Orlando Airport to catch my flight to WIIS-Canada when I stopped (read: slowed down a little, I mean, I was really late) to read a billboard ad that called women “the world’s largest untapped resource.” I didn’t get a picture, or figure out who made the billboard at the time (read: real late), but I’ve been stewing about it all day, so I figured I would stew a little on RelationsInternational.

It was about six hours before I was able to research this and see where if came from: CARE.org. More on that soon. While I assumed it was well-intended, it still made me very angry: was I a keg in need of tapping? Or perhaps an oil reserve? Who has the right to decide to ‘tap’ me? Where is my agency? Isn’t there a contradiction between declaring oneself ‘powerful’ and calling, in passive voice, the same person an ‘untapped resource?’ This picture isn’t the poster that I saw, but it is similar – and, though I knew it was probably well-intended, I walked around most of the day feeling like, in addition to being an on-face ridiculous characterization, there is something violating about this ad campaign.  Things just got more complicated when I saw where it came from. CARE is a leading humanitarian organization with an impressive record overall, little negative press, and some decent gender analysis on their website. So, here’s the summary: the characterization is inaccurate; I feel guilty for being mad; and I’m (still) fighting mad. I’ll explain all three …

The characterization of women as an “untapped resource” brings up 102000 google results, most of which are talking about some sort of skilled labor shortage. So, as striking as the CARE posters are, they are not particular original. Still, this is the first time I have come across the characterization, so I am struggling with it for the first time. Putting aside that I think a large multinational humanitarian organization advertising in American airports should have avoided the term “tap,” given that, in American vernacular, it is largely used towards women to describe having sex with them, I still find the phrase highly problematic.

First, as I described at the beginning of this post, women are, in the phrase, a “resource” (a passive object) which needs to be acted upon by some understood subject (presumably, men who do the normal “tapping” of resources, because if women are the resources, they can’t tap them). The resource is not an agent in this phraseology: it is an object of agency. Second, in the phrasing of the campaign, women are instrumentalized: they are “powerful” and to be “tapped” for the purpose of “changing the world” rather than for the deontological value of the women themselves. Third, the phrasing commodifies and economizes both femininity and life more generally, suggesting that they are market values/marked-valuable/market-valued. Just yesterday, I was reading Judith Butler and Athena Athanansiou explain the dangers of turning bodies into commodities … they include but are not limited to a dispossession of self of the commodified against their will.

But even if we were to assume that women are “resources” to be “tapped” – to me, the most offensive thing about this poster is the characterization of women as “untapped” rather than as “resources.” Being stubborn for a minute, one can think of this in the slang use of the word ‘tap’ – in the US alone, a woman is sexually assaulted every two minutes, leading to more than 237000 sexual assaults every year. Quite literally, there’s way too much ‘tapping’ going on. Thinking of the literal sense of the word ‘tap’ extends that imagery a bit – if tapping is touching, then women aren’t just tapped – they are slapped, hit, and beaten, frequently for no other reason than being identified as women. The frequency of the beating of women goes from every two minutes to every nine seconds: that is, it is twelve times as likely as sexual assault. And this is just in the US. One in three US women will be beat in their lifetimes. While I use US examples and CARE works outside the US exclusively, the point about the language that they are using holds: when you talk about women as passive objects to be acted on, … it reifies people ‘acting on’ them. My initial reaction to the suggestion that women be “tapped” more is something to the effect of ‘hell, no, how about a campaign to keep your damn hands to yourself?’

While I am being a little tongue-in-cheek, I think those critiques do matter. But the biggest problem with calling women “untapped” is that women clearly do the great majority of labor (care and otherwise) in the world. The recent Shriver report in the US is just a tip of the iceberg: the female face of poverty is not because women are sitting around waiting to be “tapped” as “resources” for industry, engineering, or changing the planet. Women are working, but their work is undervalued and underpaid, their paychecks are unstable and vulnerable, the constraints on their labor choices are multiple and intersecting, and, oh yea, see the above discussion of the fact that they are regularly beat and sexually assaulted. Women are “tapped” (and often, tapped out), they just are not recognized for it or rewarded for it.  The wage gap (and indeed paid labor gap) makes women seem “untapped” to the unobservant eye.

Still, CARE works outside the US, and while I might be its target donor, I am not its target demographic. The organization is trying to eradicate poverty, and, from what I can tell, in a fairly gender-sensitive way. They clearly mean well, and put their money where their proverbial ‘mouth’ is – CARE donates significant amount of time and labor to the cause of positioning women better in the world, and in about 20 minutes of internet searching, I cannot find a single criticism of the way that they do that work. Their financials are publicly available on their website. Other than being a little crisis-centric for my tastes and failing to reflect on the radicalization of poverty, I couldn’t find anything I thought was majorly problematic about their website or internet advertising material. So I feel guilty about attacking the airport poster because I can hear my activist friends’ voices whispering in my ear – don’t attack them, they are the good guys (note: no one actually said this. I am just imagining it. And kind of agreeing).